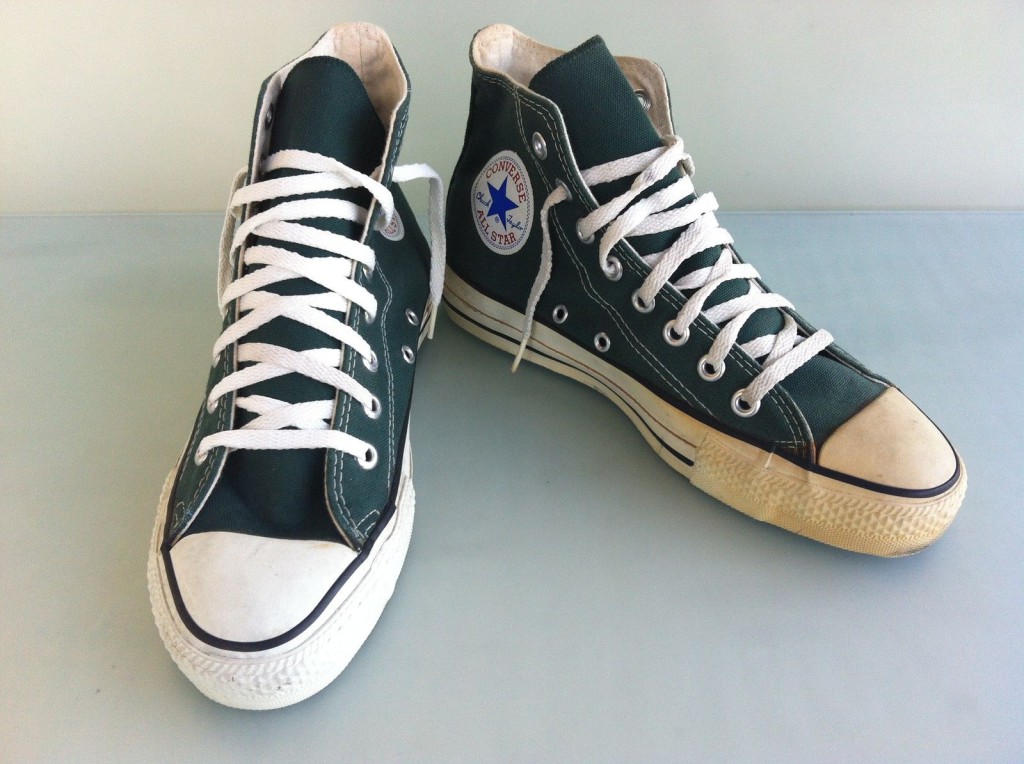 Ever had a pair of yellowed Vintage Chucks? I did. Some pairs on Ebay have some yellowing, like this pair. Most of the times one of the shoes has been in the shopping window and started tanning. The other shoe safely left behind in the box. Not a very nice view and in my opinion not ready for selling. On the internet I found some information about retrobrighting. It’s mostly used by collectors of computer parts like the old Amigas and Commodore 64. You probably have seen some older computers all yellowed, sometimes even brownish. Some of these nerds discovered that using a mixture of hydrogen peroxide and oxygen based bleach like OxyClean can change your computer into new.

I wondered if something like this could work out with some new, but discoloured Converse All Stars. On the internet I found some examples of people who had tried to bleach some old Nikes, so maybe it would work out. Last autumn I tried. I went to a hairdressers salon, bought some hydrogen peroxide (cream, 15%) and mixed it with a tea spoon of OxyClean. Using it on a left discoloured shoe, placed it on a sunny spot outside and left it there for about three hours. The result was incredible. No difference to be seen between the left and the right shoe afterwards. So retrobrighting is a good solution for discolouration on your Vintage Converse All Stars. If you plan to do so, first have a look at Youtube, don’t forget to use gloves and most important, work carefully. Don’t touch the canvas, it only works on the rubber! If you can’t find a creamy hydrogen peroxide you’ll have to use some glycerine and xanthum gum to make the substance more like a paste so it won’t fall off your shoes.

Good luck and if you have any questions, don’t hesitate to contact me.